We can now reveal the first winner of Coffee Masters NYC.

After a long first day of battling between the 20 contenders, as they tackled the cupping and brewing disciplines, we were left with 8 baristas who went head-to-head in the quarter-finals on Saturday. The creativity and passion of these baristas was plain to see, as well as the drive and determination from these fantastic coffee professionals.

After an intense Saturday, Sunday began with four strong semi-finalists: Ben Morrow (Australia), Ryan Fisher (USA), Jennifer Custard-Jarosz (USA) and Reef Bessette (USA), wowing us with their impressive barista skills as they were challenged to make a new espresso blend in just 30 minutes.

Both Ryan Fisher from Denver’s Commonwealth Coffee and his competitor Australian Ben Morrow from Australia’s ST Ali were determined to become the first Coffee Master NYC, pouring their heart and soul into the competition and especially their signature drinks.

With the battle over, all the audience could do was wait with baited breath as the judges deliberated. Would Ryan or Ben lift the trophy and become the first Coffee Master NYC?

And the winner is… Ben Morrow from Australia.

“Coffee masters is a true challenge for Barista’s globally.” said Ben. “Those who want to prove the level of skill, speed and finesse will be rewarded here. The competition itself has demands to meet that are both physically and mentally gruelling. The amount of coffee required to taste. The level of service required throughout the comp. The engagement with the judges and at times the MC whilst still preparing drinks.

“I really enjoyed the competition when I was up there even when things went amiss. At the end of it, after giving everything I could and them being massively caffeinated I took home the trophy. Raising that above my head was one of the best feelings I’ve ever had in my life.” 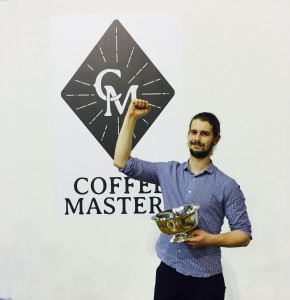